"I have found God, but he is insufficient." (Henry Miller)

Putting Beauty In Its Place

The paintings of Xiao Guo Hui are a playful response to the modern idea that beauty is not the raison d'être of art. Beginning in the 1860s avant-garde artists made beauty a martyr for its cause by sacrificing it upon the altar of subjective experience. This singular act dismantled the idea that beauty is synonymous with artistic excellence, an idea that had been slowly evolving for over half a millennium (beginning with Plato's Republic and rising to its zenith in the art of the Christian religion). Nietzsche's claim that "Christianity is Platonism for the masses" sums up this history decisively. With the modern rejection of this ancient ideal, it was no longer art for art's sake, but art for artist's sake.
Artists like Charles Baudelaire humanized art in the process, making it less ethereal and more visceral. By focusing their attention on the human subject, they made beauty truly belong to the eye of the beholder. So, when Xiao says that he does not want his work to be "seen apart, but rather for people to see themselves within it," he is echoing an old idea that the subject-matter of art is the only object-matter that matters. Nothing is "beautiful" apart from what our eyes consider to be beautiful things (breasts on a platter, no less).
Baudelaire asks “What is pure art according to the modern idea?” His answer is instructive, and sums up how best to think of his work and what followed in its wake: “[Art] is to create a suggestive magic, containing at the same time the object and the subject, the world external to the artist and the artist himself.” Modern art is as romantic as it is real, as external as it is expressive, and as suggestive as it is subjective. Modern art is magic.
This turn to the subject as the object of concern freed us to practice what Xiao calls "inventive thought and discernment." However, Xiao's insightful response to this story of martyrdom is to playfully argue through his discerning brush that while the modern avant-garde were right to reject beauty as the criterion of art, they were wrong to think that beauty was not an essential component of human life. Xiao knows it is. His paintings show that life has beauty because it is ugly, grotesque, macabre, deviant, pathological, and horrifying. 'Beauty' is a relative term. Winner's Game as Guantanamo Bay.


By putting beauty in its place among every other aspect of our experience, Xiao makes it possible for each of us to figure out how to live a beautiful life on our own terms (the only terms that matter). How is this done?
The first step is to follow Xiao's historically sensitive lead in affirming beauty's modern displacement. Consider Edouard Manet's "beautiful" Olympia. It is rightly regarded among art historians as the first real modern painting. Why? It hints at the fact that such relative beauty has within it the seeds of its own subjective destruction. Notice the black cat at the right side of the canvas. If anything represents the harbinger of the disaster that is to befall the beautiful Olympia, it is this femme feline.
For there will come a time when beauty's attendants won't notice her any longer, nor send her flowers, nor position her lying languidly on her bed as she stretches her sweet anatomy. She will no longer be art's darling. In The Martyr Of Beauty Xiao bears witness to the fact that this lost time has already come and gone. Beauty is not so picturesque as Olympia, nor should she be. Rather she is now sprawled out on an operating table like a cadaver waiting for an autopsy. Everyone else does everything but notice her (and rightly so), whether it is engaging in the play of sexual innuendo, or the work of necrotic analysis. Beauty is dead. Long live the beautiful.


This death should give us serious pause. If beauty is no longer art's reason for being, it cannot be used as the basis for determining what is a work of art from what is not. Xiao's work cannot be understood apart from this fact. If you look long enough at his paintings a curious sense of estrangement begins to demand your attention. This demand can be expressed in the form of a question: What makes The Martyr Of Beauty, or Winner's Game, or Unclothe Hercules art? Can we look at these paintings and find within them what we need to answer this question? Does Xiao's work wear its artistic essence on its canvased sleeve? In the post-Warhol era the answer to these last two questions is a decisive "No."
What made Andy Warhol's Brillo Box so important in the history of modern art is that it was the culmination of art finally coming into critical consciousness. This "sculpture" raised within itself the question of what it is. Clearly in this case you can't point to further Brillo Boxes to determine which one is a sculpture and which one is merely a shipping container. In the Stable Gallery show of Warhol's work in 1964 art finally exhausted its own resources to define itself. Art raised the question of its own essence (Is the Brillo Box art?), but was incapable of answering it. At this point art and reality were indiscernible.
"It has always been taken for granted that one could distinguish works of art from other things by mere inspection," Arthur Danto writes. "Now we know that this straightforward way of learning cannot work, and that the meaning of art cannot be taught by examples." How can it be taught? We need philosophy to answer this question. 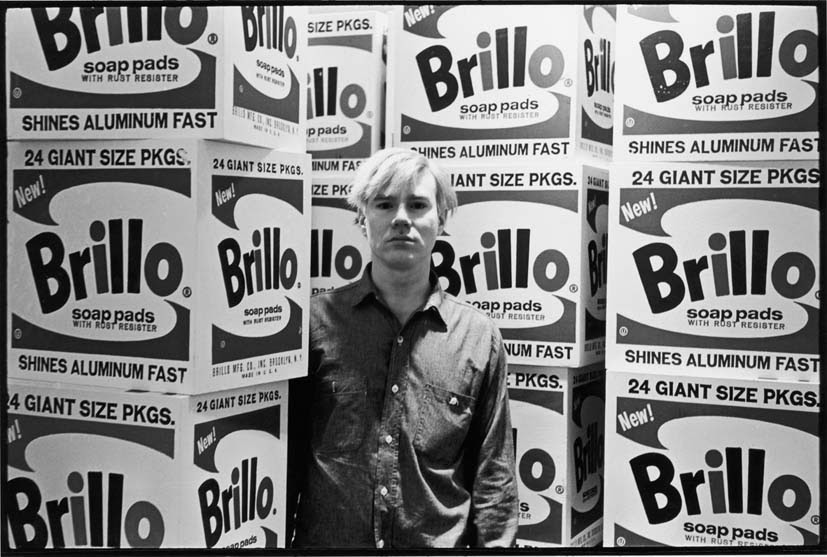 What makes Xiao's work important, and well worth collecting, is that it hints at a philosophy of play as the way to teach the meaning of art. "I am fascinated by play for I believe that only in play is our true nature revealed," Xiao writes. "I like to create a limitless playground where [the viewer's] imagination is free to envision endless possibilities and personal reflections." Painting is Xiao's playground of the imagination. It is only through a life of play that we can begin to figure out what makes life beautiful.
Consider the card game as an example of what it means to play. This game runs as a theme through Xiao's work like a narrative spine. The card game in this context functions as a metaphor for the job of statistics: the taming of chance. To live a beautiful life is to tame chance. Of course one way to tame chance is to stack the deck. Even the mighty Hercules stands no chance against lady luck when she is both player and dealer. In the game of life we pay our money and we take our chances (especially when it comes to sex and romance). Xiao's The Martyr Of Beauty, Winner's Game, and Unclothe Hercules respect chance enough to play with it, and chance respects this play by allowing herself to be tamed by him and through them, at least until we are taught that art is getting away with surviving in style.


I began this essay by stating that Xiao's work is a playful response to modern art. This is not the response. It is a response. In fact, it is my response to what I take to be Xiao's response. It is the product of my attempt to be inventive and discerning. This is as it should be.
I usually interview the artists I write about before I start an essay. But in this case talking to Xiao was not necessary. In talking to him I would only be confirming what I have already gathered from his paintings. By not talking to him I honor and respect his work. Even if I did talk to him about his paintings he would not be able to talk about them. Not really. Why? Because he does not fully understand one painting he has produced. No one does. Not even someone like Dali, who claimed that the reason why he never understood one of his paintings is because he only creates enigmas.


Jack Grimaldi: "So you're the big hoodlum? Personally, I don't see it."
Mona Demarkov: "Keep lookin'."

Through resolving door
To Rumi's killing floor.
Two hinges that swing:
Hard between guru's muse
And a piece offering he brings,
Her power to amuse or abuse.
Libido over Credo.

Intrigue intrudes her body
Electric bitch embodied.
Tatiana takes no prisoners:
Let no one enter here
Who is ignorant of her,
Syndromatic biosphere.
Mona over Persona.

Never one only two
Buddhas will ever do.
Alone but never lonely:
Goodness inside beside
Tatius leaving evil behind,
Mindful of Persian purity.
Breath over Death.


Mona Demarkov: "You can dig one grave or you can dig two."