Sum Of The Dharma

some of the dharma 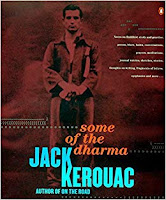 Nineteen years ago I was on the road and needed change for the bus. I only had a $20.00 bill in my pocket. I looked around and noticed I was near a used bookstore. I walked into the store thinking that I could break the bill by buying a book. A book on the shelf near the front of the store window caught my attention. It was some of the dharma by Jack Kerouac. It was large and heavy, at least compared to Dharma Bums. Because it was used I got it for half the retail price. When I handed the cashier the bill I asked if they could break down the change into coins. “The bus?” she asked. “The bus” I said, smiling sheepishly. I left the store and waited for the bus. It was raining. When it arrived I walked on, settled into my seat, and carefully took the book out of the wet bag. I opened it to the first page and read the following words of dedication: "I love Allen Ginsberg - Let that be recorded in heaven's unchangeable heart - " (Jack Kerouac). Priceless.
Posted by Rory A.A. Hinton at 12:08